Mastering the jazz repertoire is a journey that takes a lifetime of study, and at times on the way it seems overwhelming. There are thousands of songs to choose from and it can feel like the repertoire is endless when you’re at a jam session where every song that gets called is completely new to you.

The good news is, some jazz standards are very much more important than others.

Some tunes get called often while others are obscure and come up rarely. Believe it or not, the number of songs that are called all the time is actually quite manageable - start with these and you'll be well on your way to being on familiar territory most of the time.

How do we know it’s these songs?

Lots of people have made lists of these big songs - and there's a broad consensus - but I wanted something a bit more objective and data-driven. This is exactly the kind of problem that’s well suited to a really good spreadsheet.

Since 2019 I've been keeping a record of every song that gets called at every session I've played at so I can take a look at the patterns that emerge.

This sample is of just over two thousand calls (occasions when a song was played) at jam sessions, gigs and rehearsals in London since mid 2019. This data reflects my experience - if you go to different sessions then yours will contrast - but based on research and conversations, the broad sweep seems relatively consistent.

So what do we learn from the data now it's been collected?

Most songs are called only very rarely 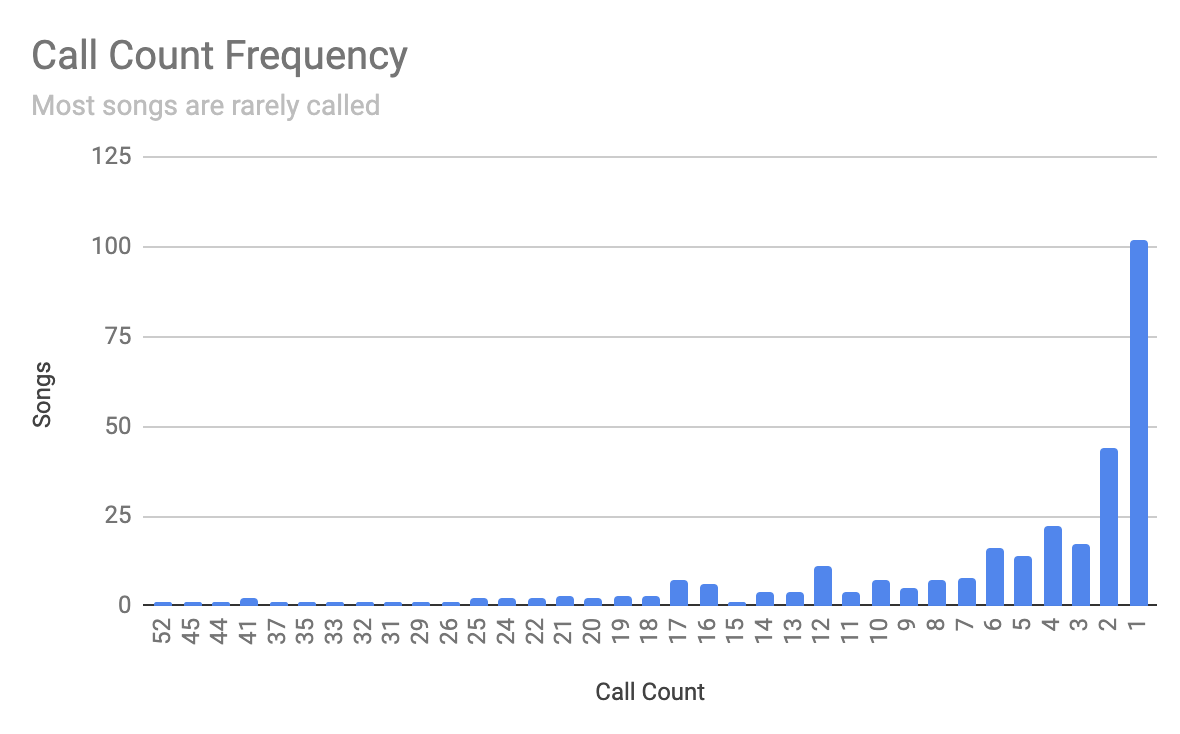 In this dataset songs only called once are by far the largest group. Many of these are relatively obscure tunes brought by a horn player or singer to one jam session that probably won't come up again very soon. This long tail behaviour is what you'd expect given the thousands of jazz songs out there and the social nature of jazz musicianship.

A couple thousand or so is still a relatively tiny sample. You would expect some of these at least to get called more and climb up the chart, while the overall shape of the distribution remained similar.

A relatively small number of songs comprise the majority of calls 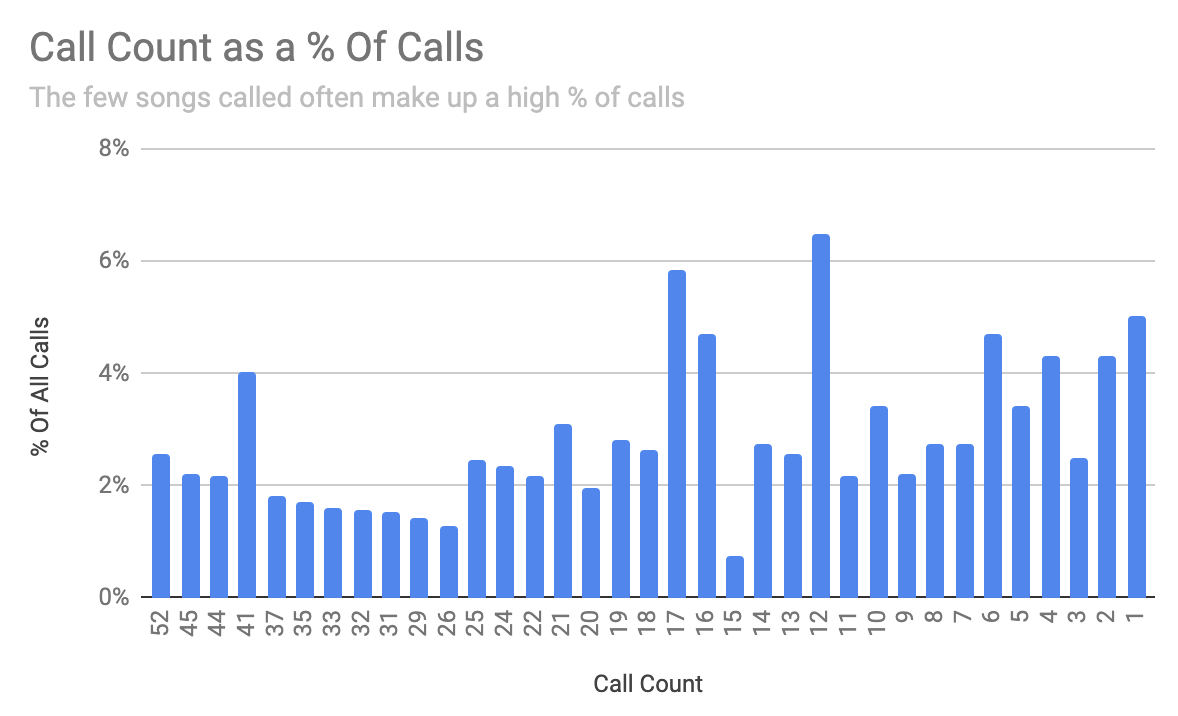 Getting to the point where you knew every other song requires you to know 42 songs. Although this may seem like a lot when you're just starting out, with time this will come to feel very manageable.

The songs here are driven by this data, although I've editorialised slightly where rehearsals for bands I play in have made somewhat obscure tunes rise up the list.
(A link to the full data is below if you're curious to draw your own conclusions.)

As I carry on collecting data, I’ll be adjusting these to reflect any changes that come up.

Songs from the list on this site comprise some 78% of calls. For a list that's aiming to be representative of the most important tunes in the repertoire rather than exhaustive, that feels pretty decent.

What should I do if I already know these 25?

By the time you know these tunes, it’s time to forge your own path through the repertoire. While picking common songs is still helpful, once you have that core set of tunes down, it can also be fun to pick something a bit more obscure !

If you don’t already have a list of songs you like and want to learn, I’d suggest listening to the master spotify playlist of 200+ songs on shuffle and waiting till something really grabs your ear, then investigating that.

The raw data underlying this post is available in a CSV here.

Updated October 2021: This post was updated in October 2021 to reflect changes in the data since the original publication. Autumn Leaves and Take The A Train left the top 10 (but not the top 25) to be replaced with Caravan and There Will Never Be Another You. Bye Bye Blackbird, Doxy, Footprints, Song For My Father and Summertime slipped out of the top 25, replaced by Four, Ornithology, On The Sunny Side Of The Street, Solar and This I Dig Of You.